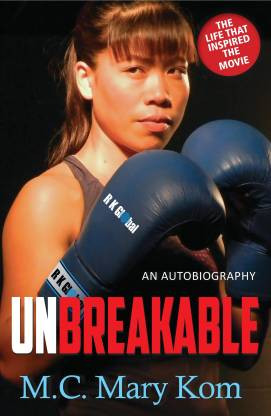 <em>Abhedyam is the Telugu version of the inspiring and moving autobiography of the five-time World Amateur Boxing Champion, Mary Kom, titled Unbreakable in English.</em>

Abhedyam is the Telugu version of the inspiring and moving autobiography of the five-time World Amateur Boxing Champion, Mary Kom, titled Unbreakable in English.
n
nSummary of the book
n
nMary Kom chronicles her amazing journey as a boxer in this tell-all autobiography - her unyielding love and passion for boxing, and the countless hurdles she had to face on her way to fame. She recounts the events in her life that occurred until she became the only Indian woman boxer to have ever won medals in all the six world championships. Born to humble peasants, Mary had to struggle to be trained under the Manipur state boxing coach. It was only her unwavering willpower and a burning passion for becoming the best that made her train to accomplish only one dream – help her family lead a better and a more fulfilling life. Although she was trying to make a mark in a male-dominated sport, Mary managed to win the bronze medal at the Summer Olympics in 2012. She also doesn’t forget to mention the extraordinary support she received from her husband, K. Onler Kom, and her family.
n
nAbout M. C. Mary Kom
n
nMangte Chungneijang Mary Kom is an Indian boxer. She is the only Indian woman boxer to have qualified for the 2012 Summer Olympics, competing in the flyweight category and bag the bronze medal. She has been honoured with several prestigious awards like the Padma Bhushan, Padma Shri, Arjuna Award and the Rajiv Gandhi Khel Ratna award, among others.
Binding: Paperback
ISBN: 9789351160090, 9351160092
Language: English
Pages: 160
Publisher: HarperCollins Publishers India