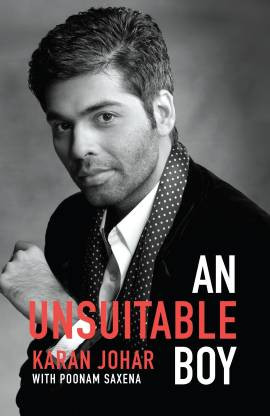 Karan Johar is synonymous with success, panache, quick wit, and outspokenness, which sometimes inadvertently creates controversy and makes headlines. KJo, as he is popularly called, has been a much-loved Bollywood film director, producer, actor, and discoverer of new talent. With his flagship Dharma Production, he has constantly challenged the norms, written and rewritten rules, and set trends. But who is the man behind the icon that we all know? Baring all for the first time in his autobiography, An Unsuitable Boy, KJo reminisces about his childhood, the influence of his Sindhi mother and Punjabi father, obsession with Bollywood, foray into films, friendships with Aditya Chopra, SRK and Kajol, his love life, the AIB Roast, and much more. In his trademark frank style, he talks about the ever-changing face of Indian cinema, challenges and learnings, as well as friendships and rivalries in the industry. Honest, heart-warming and insightful, An Unsuitable Boy is both the story of the life of an exceptional film-maker at the peak of his powers and of an equally extraordinary human being who shows you how to survive and succeed in life.
nSpecifications
Binding: Hardcover
ISBN: 9780670087532, 067008753X
Language: English
Pages: 323
Publisher: Penguin Random House India Pvt. Ltd